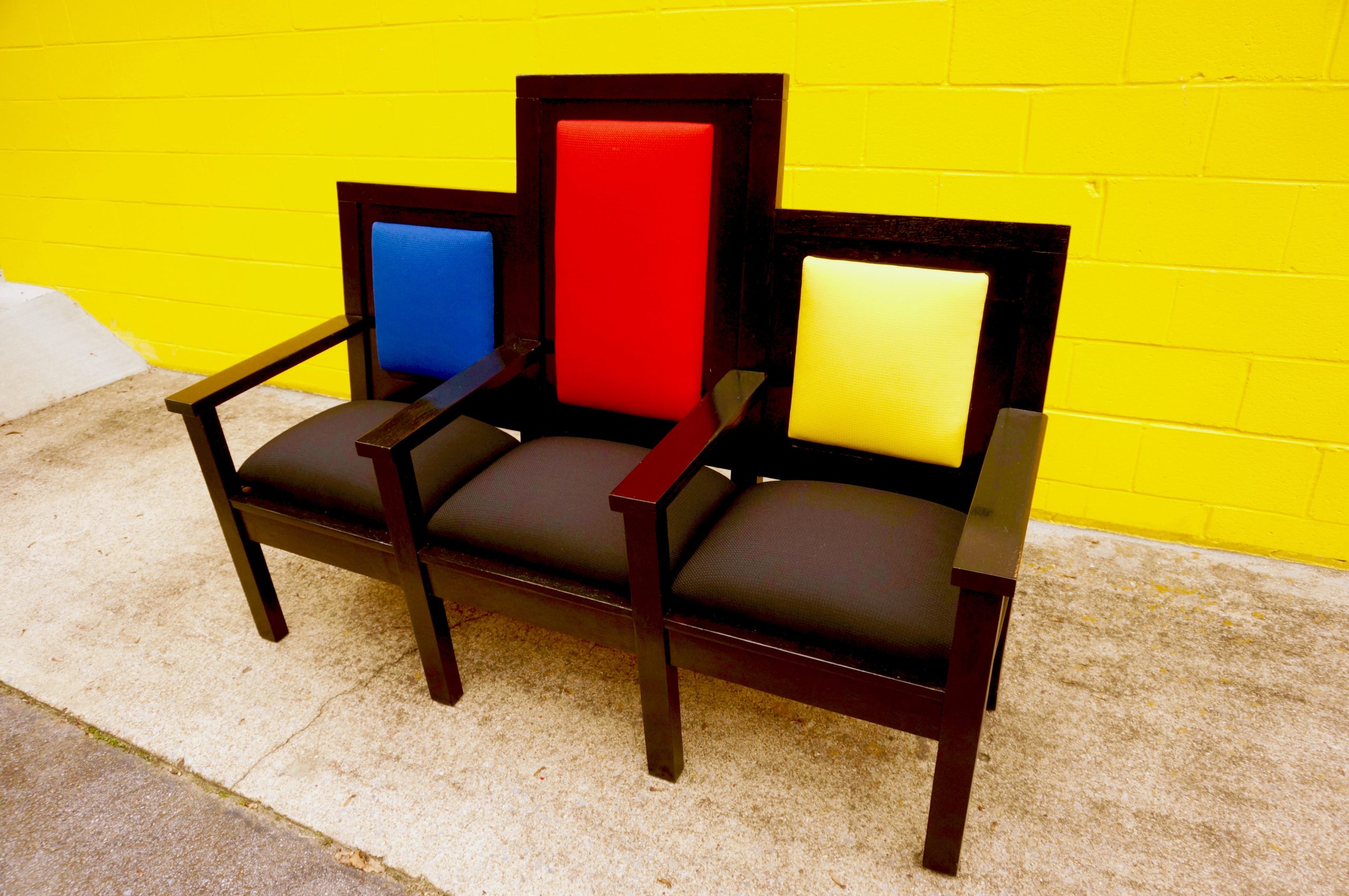 Jack found this unusual chair that contained no fabric, no padding, joints that were weak and unglued, remnants of jute webbing barely hanging in place and wood finish that was long ago wasted away. What was also unique about this chair is that it came from a masonic temple. The piece is three chairs joined together as a sort of throne for ceremonies. Jack took on this task and decided to make a tribute to the three large doors at Third Man Records in Nashville which are yellow, red, and blue. He searched through oceans of fabric to find a pattern that was offered in all of those major colors as well as black. The Knoll Furniture and Design company had just what he needed. It was a thin fabric, so it wouldn’t be so forgiving to work with. Jack’s idea was to ignore the way the piece was originally upholstered (which was surface mounted with finish nails and scroll gimp, probably) and update the design to a more modern approach: no surface mounting, no welt cord, no finish nails. This would require him to build his own oak frames to upholster and then scarily mount them from behind with screws without ripping the fabric.

Any upholsterer will tell you that it is always easier to follow the format that was on the chair at the start of the project—whether by the original designer or by the last person to upholster the piece—figuring that they had encountered problems and already dealt with them previously in their choice of technique. But Jack was dealing with different concurrent concepts: make a tribute to the doors and colors of the original Third Man building in Nashville, make a piece that people could see and sit on in the new Detroit Third Man location, and lastly, refinish the wood with a technique that he had once heard about—melt down antique 78 rpm records and use them to refinish the wood in black.

He tried two experiments with the antique records. One was to have a bucket of denatured alcohol and the other was to use a bucket with lacquer thinner. He took two old broken 78 records from his collection and placed one in each bucket. The record in the alcohol turned into sort of a stretchy, rubber version of the original stiff record, but the one in the lacquer thinner simply turned to black liquid. That outcome was perfect. Jack tested it out on the inside back legs of the chair and it worked great, but applied too thin and it was chocolate brown looking. Surprisingly, applying the record liquid too thick had it look just like black paint, so he tried to stay somewhere in the middle and leave the grain of the wood to show through as well as leave some occasional brown tones.

Jack re-glued all of the joints of the chair and clamped them overnight. He sanded as much of the old finish off as he could and then began the task of applying the old records in liquid form to the piece with occasional help from local street urchins when needed. He was tempted to just leave the black finish on its own, but was afraid it would eventually wear out over the years. So the best thing he thought he could do to protect the black was to cover it with coats of shellac. Shellac comes from the remnants of beetles in India and was used in the making of old 78 records at that time period. Anywhere up to 40% of an old record would be shellac, so it seemed extremely appropriate to use. He did six coats of shellac, lightly sanding between coats, it took about six old 78rpm records to make enough finish for the entire piece using record titles like “Waiting on the Robert E. Lee” by Al Jolson, “Ill Wind” by Lena Horne, and “Blue Orchid Fox Trot” by Sammy Kaye. Jack also applied three of the record labels that survived underneath the chair for posterity.

Using red oak, traditional dowel joints and wood glus, Jack built six frames to be upholstered for the chair…all very strong and matching the original wood of the chair. He painted each one in the colors of the fabric that was to come later. An unnecessary step for sure, but these are the moments he cherishes; the times when he gets to be creative in ways that probably no one will ever see, except the next person to upholster the chair. Another novel idea that he thought to try was to use memory foam instead of traditional upholstery foam for padding. The memory foam tries to slowly retake its original shape, so it’s very interesting to use as seat padding. It’s very soft and comfortable, but not ideal for all projects, especially because it’s very expensive. But Jack thought it would help with the frequent use that the chair would see being located at the Third Man Detroit location.

Jack is very proud of how this piece came together, especially as it was his tribute to the idea of the structure of Third Man Records itself, a machine that was built over the foundations of his original Third Man Upholstery business in Detroit. He felt it appropriate to have a full circle piece that incorporated all of that story. Jack hopes that everyone enjoys the components and techniques used in this chair project as it was a very cathartic project for him.