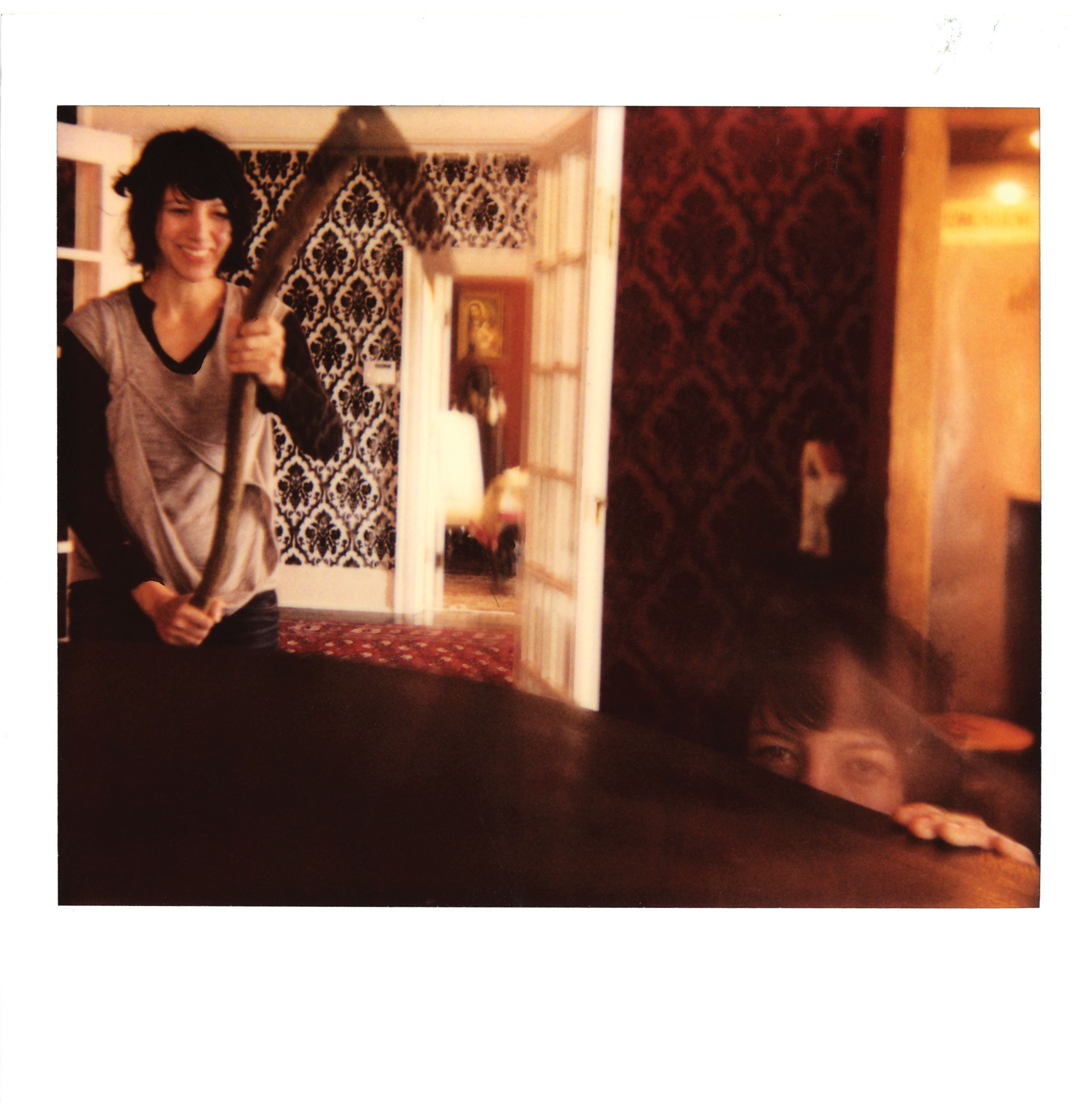 In my teenage years up through my late twenties I used to shoot photographs on one of those standard army-issue, grade A, 100-percent no-filler Pentax 35 mm cameras. Until the fateful day when I got my prints back from the photo shop (that’s what the ancients referred to as a physical location that would chemically develop what were called “photographs” and not the popular computer program of the same name you stole from your roommate’s workplace) and inside the envelope of my developed photos of a recent family trip was a note saying, “Hey Jack, I just wanted to let you know that I’m a big fan…” That was the last time I took photos in to be developed.

I decided to switch to Polaroid film from then on. It was instant, private and, I would later learn, could be manipulated in incredibly creative and gorgeous ways if you put your mind to it. I have a fondness for putting my mind to things like grindstones, so I started searching for and collecting all types of models of Polaroids—land cameras, “goose” models (the “600 SE”), passport cameras (I’ve got a lot of those), pinhole cameras, even an endoscopic Polaroid. I found exotic adaptors and lenses from Japan and from antique stores. Then, I started to experiment with “in-camera” multiple exposures; they’re done by using a sly trick that manipulates the camera into not ejecting the film, which most Polaroids are built to do in the post-land-camera years. At any rate, I’ve never gotten a digital camera, though it is pretty slick how portable they are and what nice pictures you can get from them. One drag about them, though, is that you hardly ever see anyone make actual prints from their digital cameras; they just end up being seen on computer screens and Facebook, it seems, or people have the photos on their phone until they break or lose the phone and then they usually have to start all over again. I like giving photos to people. You hardly ever hear of people making a photo album anymore, either. I used to love looking through photo albums as a child and trying to guess what the people in the pictures were saying when the photo was taken. Like silent home movies, old photos—especially black-and-white shots—seem to take on an air of romance for some reason. Probably because it’s nice for our brains to not have all the information, to have to use our imagination. I once won a Kodak disc camera in the ’80s as a prize in a fall festival contest. Those were a hoot for a hot minute, but such tiny negatives

Well, here are a few pictures I took recently and a couple I found in my hermetically-sealed titanium shoebox under the bed. Any wild effects you see were done inside the Polaroid camera and not added later in post. Only contrast was put on the scans as I wasn’t sure if they knew how dark to print the blacks in the photos for a print magazine. I’d like to put out a book of all of the multiple exposure Polaroids I’ve taken over the years some day; maybe this will help me start putting it together in my spare time…or, at the very least, to take digital images of all of these real photos and start up a Facebook page. I’ll decide later.

This is an in-camera double exposure I took with a Polaroid Spectra camera of a Harry Bertoia side chair. It has the metal-mesh ingredient of his Diamond and Bird chairs. He designed groundbreaking furniture in the middle of the 20th century. Ole Harry went to the same high school that I did in Detroit called Cass Technical High School. Maybe we had the same locker. By the time I was going there in the 1990s, the seventh floor, the “top of the tech,” had been abandoned, even though there were 4,000 students still attending the school. I used to sneak up there and scrounge around. It was a popular pastime for kids growing up in Detroit; scouring through abandoned buildings looking for whatever you could find. I was a born garbage-picker. Raised by garbage-pickers. I even played on a song called “garbage-picker” in a band I was in once. I plan to teach my kids to garbage-pick as well if they know what’s good for them. In England they call them “rag and bone” people; “mongo” is another good term I learned from the scrap-metal kind of pickers in Detroit. All of them are modern archaeologists. It doesn’t matter how much time has gone by since something’s been abandoned, it’s still an artifact, even seconds later. But putting a relic of any kind back into use, that’s the hardest part. Modern scientific archaeologists of course have no plan to reuse the items they find. I once got ticketed while garbage-picking for not wearing a seat belt. That was by the time I had a car and started driving around doing it. Detroit changed from trash cans to dumpsters to solve its alley rat problem in the 1980s. Then a decade later, it changed to curbside pickup. But it wasn’t like other cities; “curbside” just meant people dumped all of their trash by the street ANYTIME they wanted, not the day before it was picked up. I found drum sets, lamps, paintings, everything. But I once found a chair designed by Alvar Aalto in a collapsed house. It’s reupholstered now and is in my studio in Nashville. But this chair designed by old Harry in the picture, I can’t remember where I got it exactly. It feels like it was a garbage-picked find of mine. Well, aren’t they all?

TWO MEN IN MY BACKYARD

I took this picture of two men in my backyard. I was sitting, looking at the magnolia tree and holding my Polaroid SX70. I have a few of them and for a while you couldn’t get the film anymore. Then these disgruntled old Polaroid factory employees stormed the factory, took over the ship and have started to make film again for different Polaroid cameras. They’re calling it “The Impossible Project.” Funny, that was the name of my autobiography; well, not anymore. They should maybe put St. Rita on their packages, she’s the patron saint of the impossible. Maybe they don’t know that. At any rate, these two gentlemen were in my backyard and I asked if I could take their photo. They said sure. Quiz—are these men:

If you answered any of the choices above you are dead wrong. This is Josh and Abe. Josh is an engineer from my studio and Abe is a guitar tech trying in vain to fix my guitars. They were just wandering around my yard, obviously not doing a goddamn thing at that moment. I sort of hate posed pictures of people, and really hate when people ask me to pose for pictures. I like photos of people doing something—talking, working, even watching tv. But like I said, these guys weren’t doing jack so why NOT make them pose? Good men. Actually, if you did answer any of those choices you’re probably technically correct; these fellas have worked in my garage, and moved large crates in my yard. And, hell, they could be cousins of mine, who knows? I have hundreds of them. I am the youngest of ten kids, my mother is the youngest of ten, my father came from a family of seven and they all had a hundred children. I’ll never meet them all. It would be nice to have a room in my home covered in wallpaper that was nothing but headshots of my distant cousins. Next year.

There I go photographing drummers again. What is this? Anyway. This is an in-camera Polaroid double exposure that I took at a Southern mansion we were all spending time in. I asked Carla if she would become Death, and know Herself in the end. She complied with great joy as you can see by the ultra Mona Lisa smile on her face. Fortunately, before she could harm herself I put the camera down and took the sickle from her. We all went climbing apple trees that day and made an apple pie from the bushels we brought back to the house. I’m not any good at making them, but I can pick them and I can be talked into a slice if a cup of coffee is close by. I wish I had a photo of dear old Mom attacking herself like this, but in those days of course they didn’t have instant cameras. People had to stand outside for exposure times of up to three hours. Some of them died from exposure. Luckily, she made it, and so did the bizarre Carla Azar. What a wonderful drummer to play with, so loud and so complex.

THE COVER OF THE MAGAZINE

It had been a long time since I had taken a picture of myself that wasn’t in a photo booth I suppose. Photo booths seem almost erotic to me, or dangerous. I don’t know why they feel so compelling to me, especially the “dip and dunk” booths that use photographic chemicals. I’m in the process of restoring an original “Mutoscope Photomatic” booth that, when finished, will be the only working model in the world. The photos come out of it in a metal or paper frame. I’m hoping that this one will have wooden frames if we can pull it off. The picture on the cover of this magazine was taken with a Polaroid 1200 Spectra camera and manipulated to have multiple exposures. All of them me, I suppose.

Well, they asked me for five photos but I ended up with more than that, I guess. Maybe they won’t have to print them all and we can all move to the next page. But thank you for your belief visit into my shoebox, my box camera, my camera obscura, pinhole, single-lens reflex reaction to life. Perhaps I’ll take some more down the road if there’s time, or at least so that I’ll remember a couple of things when I’m older that I can hold in my hands.